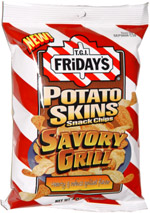 Taste test: This version of Potato Skins seemed to have less seasoning visible than other TGIF flavors, but it was still a very tasty mix of spices, with a good grilled flavor.

The flavor power was all on one side of the Skins. The shape and texture were the same as the other varieties of Potato Skins, basically a long oval-shaped thing with some curvature to it (thought not nearly as curved as the pictured on the bag showed), thicker than potato chips but really more of the texture of a slice of potato than an actual potato skin. Our tasters liked these.

Smell test: Barely any, just a slight but pleasant grill sort of smell.

From the package: “TGI Friday's® Savory Grill Potato Skins capture the rich, right off the grill seared marinade flavor combined with Worcestershire sauce and a hearty baked potato. These potato skins bring your favorite tastes from the grill to your house. One bite and you'll never look at a grill the same way again.”

This snack was discovered by Jeremy at Target. Review published January 2009.