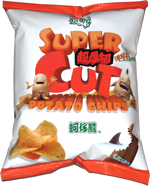 Taste test: This bag contained fairly large, mostly unbroken narrow-rippled potato chips, with a nice yellow color and some bigs bits of green seasoning in the crevices. Unfortunately, even though the chips were unbroken, they didn't fill up even half of the smallish bag.

We crunched in to find that the chips were cut fairly thick and had a noticeably harder crunch than similar narrow-rippled chips. But the big question was, how about that oyster omelet we were promised? The taste was tangy and very mildly fishy, really not bad, but we didn't notice anything in terms of an egg flavor, nor anything specifically oystery. When we offered these to some hungry snackers, most people would not touch them, based on the words "oyster omelet" alone. Those who did give them a try were mixed between disliking the and liking the flavor.

On the plus side, the front on the bag had what appeared to be a a potato and a shark, both with big grins on their faces and wearing leopard-skin pants. That's a good thing.

This snack was discovered by Jeremy at Super 88, Boston. Review published January 2015.