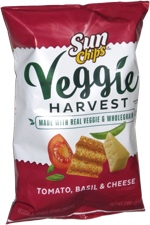 Taste test: This new line of Sun Chips stood out for the huge word "Veggie" on the bag, but there seemed to be something strange going on with the understanding of that word by the copywriters at Sun Chips.

The front of the bag proclaimed, "Made with real veggie and wholegrain." The first two ingredients were Dried Yellow Peas and Whole Corn, so I'm figuring that those were the "veggie" that they were referring to. (There was also some Whole Wheat and Brown Rice Flour farther down in the ingredients.) But that's two veggies. Why not "real veggies"? Or if it's just the peas, why not "a real veggie"? But no, they chose to use the word "veggie" with no article, like it's an abstract concept. I would hope to attribute this all to a typo, but they had the same bizarre singular usage twice on the back of the bag.

And that doesn't even touch on the usage of "wholegrain" as a single word and a noun.

As for the chips: They had the same square, wide-rippled shapes as the other Sun Chips, with a dark, orangish beige color and many small bumps and bubbles, plus some green specks on the surfaces. I crunched in to find a slightly more solid, less brittle crunch than ordinary Sun Chips, with good crispness — a very nice texture still, but not quite as nice as the brittle feel of the original. The taste was good, with a pizza-like flavor, heavy on the tomato and basil. After the pizza taste wore off, the veggies — more corn than peas — were noticeable in the aftertaste, in a very good way.

A nice addition to the Sun Chips line, even if done in a grammatically weird way.

Smell test: Very weird. Can kind of smell some cheese, but no tomato or basil, and sort of a veggie smell overall, but not a particularly good one.

From the package: “Veggie and chips together like two peas in a pod. We took the delicious Sun Chips® snacks you love and added the wholesome goodness of real veggie. Add to that the mouth-watering flavor of Tomato, Basil & Cheese for a truly, one-of-a-kind snack. It's the tasty new way to veg out!”