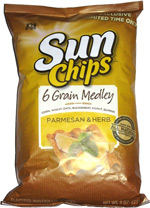 Taste test: This version of Sun Chips had not just a special flavor, but also used a different mix of grains for the chip dough.

Of the six grains they claimed (corn, wheat, oats, buckwheat, kamut, quinoa), I'm really only familiar with the first three, one's a character from the Little Rascals, and the last two I've never heard of. But none of that matters at all, as it's the taste that determines whether these are worth eating. I opened the bag (which thankfully didn't have the super-loud crinkling noise of some recent Sun Chips) to find that the chips were slightly darker than most Sun Chips but otherwise looked similar. The chips seemed a little less crisp than typical Sun Chips, as the crunch was just a little less brittle than the crunch that makes the regular ones so endearing. The parmesan and herb flavor was mild, and our tasters were mixed on whether they liked it. Nothing extraordinary here as Sun Chips go, a step down from the usual kinds.

Smell test: Nothing bad, but just barely any aroma at all. Just the slightest hint of parmesan and herbs.

From the package: “Corn, Wheat, Oats, Buckwheat, Kamut, Quinoa” ... “Six choice grains come together with bold parmesan and herb to create the all natural goodness of SunChips® 6 Grain Medley Muti Grain Snacks. It's a one-of-a-kind taste that gives you a whole new way to snack.”

This snack was discovered by Jeremy at Target. Review published May 2011.