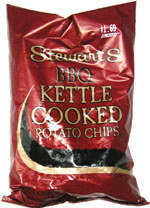 Taste test: These are good barbecue chips, with a mild but tasty barbecue flavor.

The taste is not really hot at all, except for the mildest hot aftertaste, but it's also not the least bit sweet. Somehow, it's good. They have a nice crunch, similar in texture to Cape Cod chips.

Smell test: A little oily, not too barbecuey.

From the package: “Potato Chip legend ... has it that potato chips were invented at Moon's Lake House in Saratoga Springs when the famous millionaire, Cornelius Vanderbuilt (sic), complained that the fried potatoes were too thick. The chef, George Crum, got fed up, shaved paper thin strips from a potato and fried them. Before long Crum opened his own restaurant where everyone could savor Crum's potato chips!”

This snack was discovered by Keith and Melissa at Stewart's in Clifton Park, N.Y.. Review published February 2004.