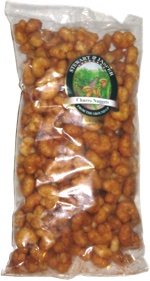 Taste test: We've long been fans of little caramel-covered corn puffs, as best exemplified by Shearer's Puffs, as well as a butter toffee version from Stewart & Jasper. Churros are a lot of fun too, but we never expected to see a snack that combines the two. Here it is!

We grabbed a handful of these and crunched in to find a taste that was a lot like the various caramel-coated puffs, but there was a bit of cinnamon and molasses. The caramel coating wasn't as consistently thin as it was with the Shearer's ones, as some of these had a nice light coating, while others were crunchier. Still a nice texture, and an impressive taste that was a lot like a churro. Very good!

Smell test: Nice caramel smell with a bit of cinnamon.

From the package: “From the ground up”