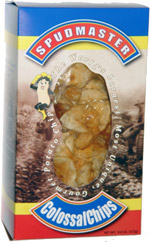 Taste test: These chips impressed us with their funky name and the claim of being the world's largest potato chips, but we needed to crunch in to decide whether it was just hype.

The chips were irregularly shaped, and sizes varied greatly, but the larger ones were indeed among the largest we've eaten, as some exceeded 6 inches in length. The only chips we've eaten that were comparable in size were Stew Leonard's. We ate several bags of these, and each bag had at least a few enormous chips, with some bags containing quite a few large ones. Breakage wasn't much of an issue. The chips were cut thick and were generally very crisp, with lots of salt and a ton of potato taste, also a bit greasy. You could see the potato skin all the way around the edge of just about every chip. Reactions from our tasters were overwhelmingly positive. People were quite impressed with the crunch, taste and size of the chips, and they quickly ate their way through each bag that we tried. We didn't realize until reading the box that they were seasoned with more than just salt, as the mix of spices was fairly subtle and seemed to be present on only some of the chips, but it did help to bring out the great potato flavor.

From the package: “What is it that makes our chips so special? Our team takes great pride in creating the world's largest, most unique potato chip and that sincere commitment to quality is the guiding principle in every step of the ColossalChips process, from the potato field to you! First, we select our potatoes for their flavor and we scrub, but never peel, our spuds, leaving all the nutrients and fiber intact. Next, we lightly blanch our chips in 100% refined peanut oil, which not only enhances the flavor, but having no trans fat, places it at the top of the chart for heart healthfulness.” ... “Ingredients: Select Potatoes Cooked in Pure Peanut Oil, Salt, Garlic, Onion, Paprika, Red Pepper, Sugar and Other Spices.”

This snack was contributed to Taquitos.net by the manufacturer. Review published April 2008.