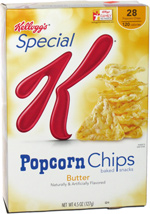 Taste test: These chips were triangular and had wiggly surfaces, with generally a light beige color much like the one shown on the box, but also a few very dark spots scattered about. The triangles were equilateral and smallish, measuring abut an inch and three-quarters on each side, so quite a bit smaller than, say, Doritos.

We crunched in to find varying levels of crunch from one chip to the next, plus a taste that wasn't quite buttery and wasn't quite popcorn-y but seemed to be in the neighborhood of both. The flavor seemed almost cheddar-like rather than buttery. The lack of a real buttered popcorn taste was a definite negative, but these were still pretty decent.

From the package: “Oh My Goodness. I love the rich, irresistible taste of popcorn, and this snack has a unique crunch and texture that's all its own. Now I know how I'll stay on track. I found my new evening salty snack.”

This snack was discovered by Jeremy at Market Basket. Review published June 2013.