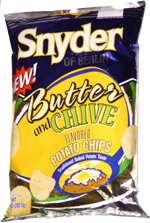 Taste test: These thinly cut, somewhat brittle potato chips had a good crispness and tasted very similar to sour cream and onion chips when I first bit in.

The more chips that I ate, the more the taste seemed to be genuinely buttery. The flavoring was good, but it wasn't nearly as strong as some of the sour cream and onion chips out there. Still, our tasters liked these a lot, as many people returned to the bag for second and third handfuls.

Smell test: Kind of like sour cream and onion chips, but different. Kind of like a baked potato, come to think of it.