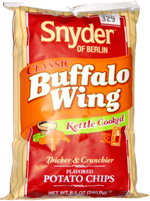 Taste test: These wiggly chips had a very good crunch and a nice crispness to go along with some orange-colored seasoning.

Buffalo wing chips tend to vary in their ability to deliver a true Buffalo wing flavor, as many are really just hot sauce but not Buffalo wing sauce. This kind was distinctly Buffalo wing and tasted quite good (though it lacked the additional blue cheese that some brands of wing chips have delivered). The heat was pretty good, not killer or anything, but moderately hot and quite tasty. Our tasters liked these a lot, and many people returned to bag for seconds and thirds.

Smell test: Nice kick of hot sauce, with some vinegar too.