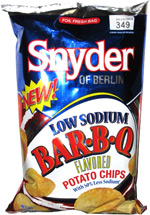 Taste test: These potato chips had sort of an orange glow to them (quite a bit more orange than the yellowish chips pictured on the bag) and there were tons and tons of chips in this huge bag.

We crunched in to find that the taste was a bit flat at first, as there was noticeably less salt than most barbecue chips, with the sweetness similarly subdued. But the taste was not bad, as people seemed to like the flavor as long as they ate at least a few chips at a time. Our tasters had these chips while drinking beer, and lots of people gave a big thumbs-up and returned to the bag for multiple handfuls.