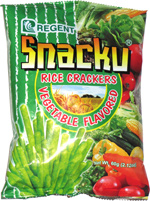 Taste test: These snacks had a great name and looked kind of like thin cheese puffs, except for their color, which was nearly as bright of a green as most cheese puffs are bright orange.

Most of the pieces had only minor curvature, unlike cheese puffs. The "Crackers" name was definitely a misnomer, as there was nothing cracker-like about them. They had a strong, sweet taste (maybe sort of veggie-like) but the texture was a bit too styrofoam-like for many of our snackers' tastes. People were mixed on the flavor, as some sort of liked it, while others sort of didn't (though nobody objected too strongly).

Smell test: Definitely an odd smell, but not a bad one.

This snack was discovered by Jeremy at Walgreens. Review published January 2013.