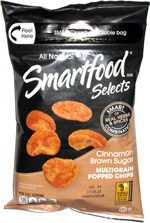 Taste test: This version of Smartfood deviated from the similarly shaped Feta Herb and Tomato Basil varieties, in that the chips were made from wheat, corn and rice, rather than beans.

The flavoring to go along with those grains was the same one that they used in the Cinnamon Brown Sugar Popcorn, and the results were equally good. The chips were dark beige, with round, wiggly shapes, and they had a light crunch and excellent crispness. There was a good helping of the cinnamon toast flavor, but not too much, so the cinnamon sugar mixed well with the multigrain chips, without being overly sweet. Really good.

From the package: “This flavor is twice as nice. We start with a naturally sweet blend of grains in our multigrain chips, and then top them with cinnamon and brown sugar for a delightfully sweet treat.”