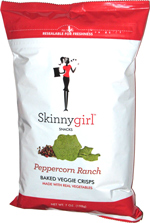 Taste test: These potato-based crisps were thin and had strange shapes, with a fairly dark green color overall but many darker and lighter green shades on closer examination. Most of the pieces were broken into smaller ones, but we did find a few that matched the intact one pictured on the bag, which looked kind of like the symmetrical profile of a vase.

We crunched in to find a very nice light, brittle crunch and a great mix of veggies and spices. The crunch was sort of like Baked Lay's, except quite a bit better, as these were both brittle and crisp in a really nice way. In the taste, the spinach was most noticeable, but it was helped along but a tasty mix of spices. We didn't notice the peppercorn among those spices initially, possibly because it was overshadowed by all of the other flavors, but a strong nice taste of black pepper did arrive later in the aftertaste. Very tasty, great chips!

Smell test: Strong veggies smell, can definitely spell the spinach along with some spices. Not that much pepper.

From the package: “Made with real vegetables” ... “If you like a little zing there's nothing like spicy peppercorns and tangy ranch sprinkled onto a crunchy, spinach and kale baked crisp, made with real veggies.”

This snack was contributed to Taquitos.net by the manufacturer. Review published October 2014.