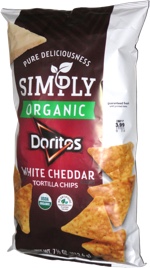 Taste test: Normally I wouldn't seek out a new chip just simply because it's organic, but when I heard that there was an organic version of Doritos, I did just that. The bag itself was a bit confusing, as it claimed a White Cheddar flavor, but the chips pictured on it were quite orange. I opened it to find that the actual color was much more yellow and less orange color in the picture. Still, they didn't look white or close to it. I could see that slightest amount of red powder on some of the chips, but nothing in terms of very pale yellow or close to white seasoning. There were many black spots on the chips. They had the usual triangular Doritos shapes.

I crunched in to find a softer, less-crisp crunch than we typically get from Doritos, but still a good texture. There was some good cheese taste, with White Cheddar being a pretty good description of it, but it was not intense. Pretty good all in all, but kind of a watered-down product compared to most Doritos.

Smell test: More like tortilla chips than the usual very cheesy Doritos, but some cheese in there too.

From the package: “Pure deliciousness” ... “Deliciousness guaranteed” ... “At Simply, our snacks are made with ingredients you can feel good about, and come from the brands you love. We call this pure deliciousness.” ... “Snack Boldly® with organic corn and real white cheddar. We are taking crunch to the next level.” ... “Certified Organic by: Oregon Tilth”