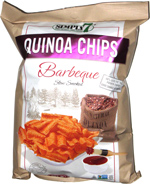 Taste test: These chips looked sort of like Sun Chips, with square shapes and a similar texture, but the ripples were even wider. The surfaces were generally light beige, with some scattered orange seasoning and just a smattering of tiny bits of black seasoning.

We crunched in to find that the chips had somewhat thicker feel than Sun Chips but still a nice crispness. The barbecue flavor was tasty and fairly mild, and the underlying chips had a nice flavor too. There was a slightly greasy feel afterward, but it really was slight.

We checked the ingredients and found that the Quinoa Flour was the first ingredient, while the second was Potato Starch (and while we're at it, Corn Starch was third) so even though the base of the chips wasn't all quinoa, it was probably more quinoa than lots of other ones we've tried, which give quinoa big billing on the package but place it much lower in the list of ingredients.

From the package: “40% less fat than potato chips” ... “Good source of protein” ... “What are Quinoa Chips? We took one of the Ancient Incan super grains and baked its flavors and nutrients into an all-natural bite-sized chip. Quinoa has been cultivated for over 5000 years in South America and provides all 9 essential amino acids, making a good source of protein.”