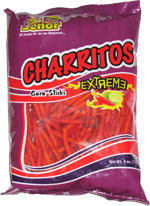 Taste test: These snack sticks promised a hot chili and lime flavor, and the very bold red color certainly looked like it was going to deliver something extreme.

The texture was similar to Fritos, but with a much different shape, as these were round-profile sticks with minimal curvature. The "Extreme" label proved not to be an exaggeration, as the Charritos were quite hot. Even just one piece provided a lot of burn, which was impressive considering how relatively small each piece was. Most of our tasters were a bit overwhelmed by how hot they were but generally liked them. But one snacker who is a fan of chili peppers, lime and heat took one bite and said that the taste was awful.

Smell test: Not much, just a bit of lime.