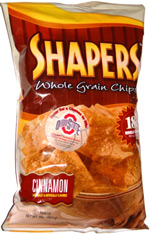 Taste test: These chips had a similar texture to Sun Chips, but they were somewhat thicker and not rippled, with some irregular shapes.

When first bit in, there was a mild but pretty good cinnamon toast taste, far weaker than other cinnamon-flavored snacks we've tried, but still OK. As that sweet taste went away, the flavor transitioned to the flavor of the underlying chip. This wasn't a particularly bad flavor on its own, but that taste really didn't go well with the cinnamon taste, so the flavor of each chip seemed to go downhill once the cinnamon sugar wore off. (There was no similar problem when eating the cheddar version of Shapers as the cheddar flavor went will with the same type of chips.)

From the package: “18g whole grains per 1oz. serving” ... “Everything shapes up beautifully with Shapers™ Whole Grain Chips. Now you can get the whole grains you need; avoid the trans fat you don't want; and add as much fiber to your diet as you like. You get a healthful helping of 18 grams of whole grains in every serving along with the goodness of sunflower oil.”