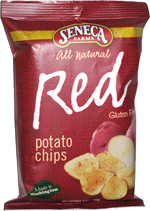 Taste test: These potato chips were introduced by Seneca in a product line that also included Blue and Yukon Gold varieties.

This version, made from Red Bliss potatoes, didn't look red at all, as the chips were primarily a golden yellow, with various shades of browning. The bits of skin around the edges weren't red either. The chips were cut thick and were quite crunchy, but they had a light feel, as there were many air pockets inside. Like the blue and gold versions, they had a very sweet, veggie-like twist on the potato taste, with a lot of flavor and not a lot of salt. Our snackers liked the crunch and the taste a lot. Definitely not your usual potato chips.

From the package: “Made in Washington” ... “Gluten Free” ... “Our Red Bliss potato chips will provide that special touch when 'ordinary' potato chips are just too pedestrian. At Seneca, we believe in pure and natural ingredients, so we prepare our chips as simply as possible and season with only the merest suggestion of salt. Our products are made in Yakima, WA, the gateway to the Cascade Mountains and where the Naches and Yakima Rivers join. Our 300 days of sunshine provide perfect growing conditions for the fresh fruits and vegetables we use for our snacks.”

This snack was contributed to Taquitos.net by the manufacturer. Review published July 2011.