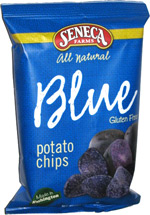 Taste test: These potato chips looked much different from just about all other potato chips, as their color fell somewhere between dark purple and black.

They didn't strike anyone as being actually blue. The chips had a thick cut and lots of bubbles embedded inside, in a whole range of sizes. It took a very close look to see that there was some skin around their edges, as the skin wasn't much darker than the rest of the chip. The chips were quite crunchy with a somewhat light feel. They had a fairly subtle potato taste, as there wasn't much salt and not a strong potato flavor, but our tasters liked them a lot and grabbed chips by the handful.

From the package: “Blue potatoes orignated thousands of years ago in South America but were only introduced in North America in the 1970's. In the past decade, these delicately colored potatoes have swept the culinary world for their exquisite appearance and rich taste profile. At Seneca, we believe in pure and natural ingredients, so we prepare our chips as simply as possible and season with only the merest suggestion of salt.”