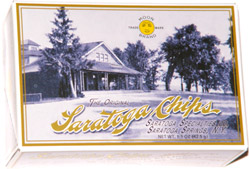 Taste test: Our tasters were impressed by this old fashioned-looking box, which seemed fancy and had some funny slogans on it.

It was actually just a thin cardboard box, containing a white foil bag that held the chips. The chips were very similar in both appearance and taste to Cape Cod Potato Chips, with the same yellow color, wiggly shapes and a similar crunch. Our tasters liked the chips and several noted the Cape Cod similarity, in some cases saying that these were better. The salt level was generally low. The claim on the box about the recipe and package being "the exact same" as George Crum in 1853 sounded suspect.

From the package: “May be served with any beverage if desired.” ... “A delicious delicacy an excellent lunch food” ... “Moon Brand trade mark” ... “Made With All Natural Sea Salt” ... “Saratoga Specialties Company is proud to offer you The Original Saratoga Chips made by gourmet artisans to the exact same recipe and packaging used by George Crum in 1853.” ... “0 grams Trans Fat” ... “Made With All Natural Sea Salt”