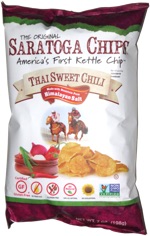 Taste test: These potato chips had wiggly and folded-over shapes, with bubbles embedded inside, some skin on the edges and a nice range of golden yellow colors. There was just the lightest possible smattering of seasoning powder, some tiny colorful bits here and there.

We crunched in to find a light crunch with moderate crispness, with just a very slight sweet chili flavor, maybe a bit weaker than the flavor of the potato itself. There was a mild heat in the aftertaste. None of the taste really said "Thai" to me, but it did taste good. We shared these around with folks enjoy some beers after running a road race, and everyone was pretty impressed by the chips.

Smell test: Some sort of seasoning, but not much of a strong chili one.