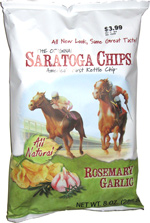 Taste test: These potato chips had somewhat wiggly shapes, with generally a light yellow color and some areas of browning, bubbles in some of the chips and light skin on areas of the edges. There was just a bit of dark seasoning.

We crunched in to find a nicely crisp, crunchy texture, with a light feel. There was good kick of flavor from the rosemary and garlic. Rosemary's fairly rare as a potato chip seasoning, so this taste was a bit unusual, but it was quite good, with the garlic playing second fiddle to the rosemary. Our snackers were big fans, as everyone who tried these had high praise for the flavor and the texture. Excellent!

Smell test: Lots of rosemary and some garlic. Nice.