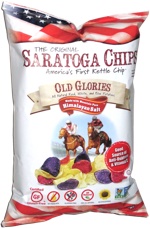 Taste test: This bag promised to deliver red, white and blue potato chips by combining three varieties of potato, so that seem like a fun idea. We opened the bag to find that there were indeed three different colors of chips, with plenty of contrast between the colors. However, it wasn't quite red, white and blue — more like reddish purple, yellow and blueish purple. The chips varied a lot in size and had wiggly shapes.

We crunched in to find a good crispness and fairly light crunch, with a good potato flavor for all three kinds. The colors didn't taste all that different from each other, but they were good.

The bag was less than half full, despite being in very good condition, with plenty of air cushioning and few broken chips.

From the package: “All Natural Red, White and Blue Potatoes” ... “America's First Kettle Chip” ... “Made with Mountain Pure Himalayan Salt” ... “Made in America”

This snack was discovered by Jeremy at Bed Bath & Beyond. Review published August 2016.