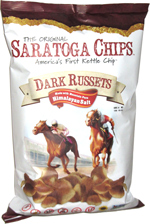 Taste test: These potato chips had very random, wiggly shapes with generally a golden brown color toward the centers and a golden yellow color around the edges. There were many small bubbles embedded inside, plus some bits of skin that was darker than those brown areas. As with other Russet chips, it was a nice look.

We crunched in to find a very good crispness and fairly solid crunch, with tons and tons of great potato flavor. The feel was dry but maybe a bit less so than other Russet chips, and the flavor was just terrific. It seems you can hardly go wrong with Russet potato chips, and these were no exception. Delicious!

From the package: “Saratoga Chips use only Mountain Pure Himalayan Salt, which is considered to be one of the purest salts on the planet. Harvested from the deepest veins of the Himalayan Mountains, it has never been exposed to modern day pollution and impurities, creating a gorgeous pink color when harvested due to the high mineral content — all of which are needed in a healthy diet.”