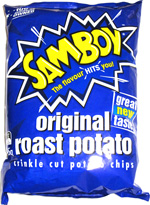 Taste test: These wide-rippled potato chips had a moist feel and lots of potato taste, but they also had a much different recipe than your typical "original" flavor potato chips.

It's just about unheard of for "plain" potato chips to have either sugar (lactose, in this case) or MSG (a.k.a. 621), but these had both. Plus, on top of that, yeast extract. We've seen all of these in flavored potato chips, just not in plain ones. The result was a rich, intense and unusually sweet (though not really sugary) potato flavor, kind of like a baked potato, to go along with a soft crunch and fairly thick cut. They were by no means bad, but I wouldn't say they were any better than many other brands of chips that achieve great potato flavor without sugar or MSG.