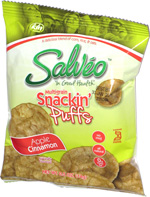 Taste test: This smallish bag felt like it contained just about nothing, and at 1/2 oz, it was pretty close to that.

I opened it to find seven fairly large round crisps (each bigger than the round Popchips) so that wasn't quite so little in terms of chip volume, but they were each very light. They were a much lighter shade of beige than the ones pictured on the bag. The really good news is that the puffs (made from corn, rice and oats) tasted quite good. They felt more substantial than their actual very light weight, and the mild apple and cinnamon flavoring was tasty. Our tasters were fans.

From the package: “Our Apple Cinnamon Multi Grain Puffs are packed with a natural sweet apple flavor, dusted with cinnamon and mingled with whole grains, for an unmistakably hearty and wholesome taste.”