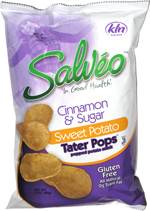 Taste test: These round crisps were a lot like Popchips, with the same round shape and wiggly surface, but slightly thinner. The crisps had a nice beige color with some shiny bits of sugar on the surfaces. Much like the sweet potato version of Popchips, these were actually made from other grains as well, with both rice and corn listed before sweet potato in the ingredients.

I crunched in to find that the feel was crisp but light, and the taste was quite nice, with a mild cinnamon sugar flavor. They didn't load these up heavily with the sweet stuff, but there was still enough of it for very nice taste. As for sweet potato, I really couldn't taste much of it, as the mixing of it with the other grains and the addition of cinnamon sugar conspired to hide most or all of the taste. But these were still pretty good.

From the package: “Our Sweet Potato Tater Pops are a delicious, savory snack that are air popped, not fried, for a light & crispy crunch with 55% less fat than regular potato chips.”

This snack was contributed to Taquitos.net by the manufacturer. Review published January 2013.