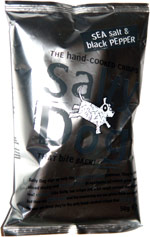 Taste test: These kettle-cooked potato chips were generally fairly small and wiggly, with potato skin visible around the edges of each chip.

They were crunchy and loaded with a nice black pepper taste, definitely a strong flavor, but not overly peppery. Our tasters liked these chips, but unfortunately, Salty Dog could only fit so many of them in this fairly small bag.

From the package: “Salty Dog digs up the biggest & best potatoes. They're then sliced thinly and hand-cooked in sunflower oil which gives them real crunch. Like Salty, our crisps are a bit rough around the edges but they are 100% real and the seasoning we use gives them so much flavour we think they're the only hand-cooked crisps that bite back!”

This snack was discovered by Leesa in Ireland. Review published June 2008.