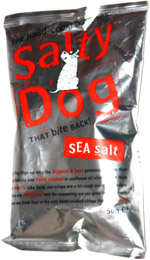 Taste test: These potato chips were generally wiggly in shape, as most kettle-cooked chips are.

The chips were in a variety of sizes, and nearly all of them were unbroken, even after enduring a trans-Atlantic flight. Each chip had some potato skin visible around the edges, and a few of the chips were folder over. The crunch was good, but the chips were definitely on the greasy side of things. There was lots of potato flavor, and the chips were very crunchy, but they would have been better if they were a bit crisper and less oily.

From the package: “Salty Dog digs up the biggest & best potatoes. They're then sliced thinly and hand-cooked in sunflower oil which gives them real crunch. Like Salty, our crisps are a bit rough around the edges but they are 100% real and the seasoning we use gives them so much flavour we think they're the only hand-cooked crisps that bite back!”

This snack was discovered by Cat Carney in London. Review published March 2008.