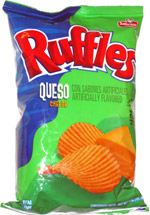 Taste test: This version of Ruffles had the usual medium-width ripples and a fairly thick cut, with an unevenly applied orange-colored seasoning.

When I first crunched in, the taste seemed very similar to the Cheddar & Sour Cream version of Ruffles. However, there did seem to be a little something extra. So I tried a few more chips, and particularly after my third chip, which was loaded with orange seasoning, I noticed quite a bit of extra zing in the cheese, followed by a hot aftertaste.

Although these were distributed by Frito-Lay's U.S. division, they were branded as Sabritas, which is Frito-Lay's Mexican subsidiary, and they did indeed have a Mexican twist to their cheese spices.