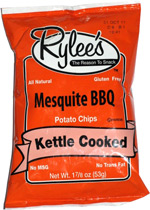 Taste test: This bag contained smallish potato chips with somewhat wiggly shapes, some bits of skin around the edges and generally a golden yellow color, with some browner areas.

The had a good crunch and a lot of barbecue flavor. The taste was much sweeter than I expected for the "Mesquite BBQ" label, as it was really almost a sweet barbecue taste, though the sweetness was tempered a bit by the mesquite. I had them with a peanut butter and jelly sandwich, and the combination worked well.

This snack was discovered by Jeremy. Review published August 2011.