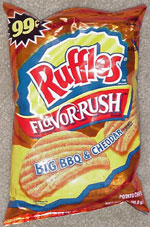 More cheddar-y than BBQ-y. Not bad. Nice and thick. We're wondering what the difference is between these and Wavy Lays. Nice aftertaste.

From the package: “Every chip is LOADED with BBQ & Cheddar Cheese and seasoned to perfection. You get the biggest taste because FLAVOR RUSH® packs more flavor into the RUFFLES ® RIDGES to give you a remarkable intense flavor experience.”

This snack was discovered by Jeremy. 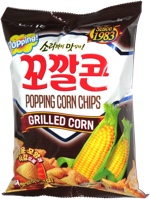