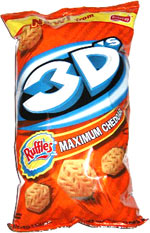 Taste test: I wasn't that impressed by the taste of these.

They weren't like a Cheetos cheese taste, it was more of the cheese that they use on the Cheddar and Sour Cream potato chips. If you like that taste, then you'll like these. These aren't really potato chips, more like potato puffs shaped in a hexagonical checkered puff. Someone said these snacks reminded her of Munchos, but I think that's just in the consistency of the snack itself. Out of all the new Ruffles 3D's I've tried, I think the barbecue ones are the best.

This snack was discovered by Melissa at Price Chopper, Worcester, Massachusetts.