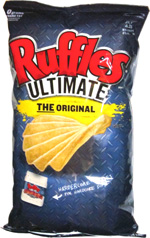 Taste test: These extra-wide-rippled potato chips were cut thick and had a pale yellow color, with darker spots around the edges and within some of chips.

I took a bite to find that the chips were super-crunchy, while still retaining good crispness. They had a very salty potato flavor, quite tasty for a plain chip. Most of the chips were fairly big, and as claimed on the bag, the wide ridges did indeed give them plenty of strength for dipping purposes. For those looking for even more flavor, Ruffles also released Kickin' Jalapeño Ranch and Sweet & Smokin' BBQ versions with the same Ultimate cut. Very good.

From the package: “Hardercore ridges for hardcore dips” ... “There's Original and then there's THE ORIGINAL. And your hunger's about to get utterly destroyed by the latter.”