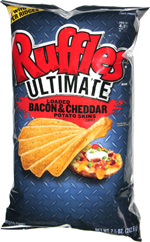 Taste test: These potato chips had extra-wide, extra-deep ripples, with a nice bright orange/yellow color and lots of large bits of green stuck to the surfaces. The chips looked really good. Chips sizes varied, but many of them were quite large.

We crunched in to find a good crispness and good strong (but not hard) crunch and a flavor that was surprisingly mild for something billed as "ultimate" and "loaded." The taste was mostly like a cheddar and sour cream chip, with more cheddar than sour cream, plus just a hint of bacon. Crunchy, tasty and quite popular among our snackers — nicely "ultimate" in terms of chip shape, but just not as "loaded" with flavor as we expected.

From the package: “Now with deeper ridges” ... “Hey you. Yes you. Lover of anything piled high with bacon, melted cheese and sour cream. Seeker of the most outrageous loaded potato skin, your dream is now a reality. Mouth — meet Ruffles® Ultimate Loaded Bacon and Cheddar Potato Skins flavored chips. Now that your mouth is full it's time to find a way to hide these awesome chips from your freeloading roommate. Hide them under the bills — he'll never look there.”

This snack was discovered by Jeremy at Market Basket. Review published October 2013.