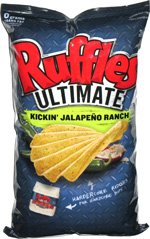 Taste test: These ultra-wide-rippled Ruffles were yellow in color, with some bits of green on the surfaces.

Most of the chips were narrow and long, with many of the chips kind of curled up. It took just one bite to realize that these were not the usual ranch-flavored chips. The crunch was more intense, plus the flavoring was an ultra-creamy sort of ranch, sort of cucumber-like, with some heat initially and then lots of heat in the aftertaste. Our snackers were big fans of these, as people went back to the bag for chip after chip.

From the package: “Your hunger's about to get kicked in the tail by the hottest ranch this side of Carson City.”