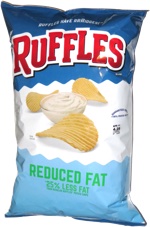 Taste test: This lowfat version of Ruffles potato chips featured chips with medium-width ripples and light yellow color, with some darker spots and bits of skin on the edges of many of the chips. Most of the chips had fairly flat or very flat shapes.

I crunched in to find a strong crunch with good crispness, and on the first bite, there was good amount of moderately salty potato flavor. The crunch was a bit stiffer than standard Ruffles, but it was still good. After that first bite, the flavor seemed to go the opposite way of most potato chips: While most chips get more flavorful, this one actually got blander. It wasn't a bad taste, but it was noticeably less potatoey than the standard Ruffles. It seems that something was lost in flavor along with that fat.

From the package: “Ever hear the saying 'less is more'? We did. And it confused us. How could having less be good? But Reduced Fat Ruffles are not like most things. All the flavor of Original Ruffles with 25% less fat. And when your chips have 25% less fat, then you can enjoy 25% more of your BBQ faves. That's math.”