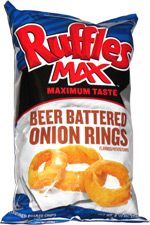 Taste test: These potato chips (and I must emphasize that they were potato chips that were supposed to taste like onion rings, not actual onion rings, as the picture on the bag caused considerable confusion among potential tasters) had medium-width ripples and various shades of orange and light brown on their surfaces.

They were quite tasty, with a mild onion flavor. Our tasters liked them a lot, praising the nice mix of onion and potato. The seasoning wan't the same as Funyuns (despite their shared Frito-Lay heritage) as this flavor was a bit less sweet. The taste reminded me a lot of the various cheese & onion potato chips from Ireland, though in this case it was somewhat heavier on the onion and lighter on the cheese. Most tasters didn't think the chips actually tasted like onions rings, but they still liked the taste a whole lot.

From the package: “Hungry for a champion among flavored potato chips? Think huge slices of onions, dunked in a golden beer batter and cooked up all crunchy. What's better than that first bite of a giant, hot onion ring? Nothing? Now think of that same maximum taste, maximum flavor you can dig into when you're with your crew — only only Ruffles® Max™ brand potato chip!”