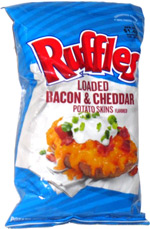 Taste test: These medium-wide rippled potato chips looked kind of like sour cream and onion chips, as they had bits of green stuck in their ridges (though I could find neither parsley nor chives listed in the ingredients, which seems wrong on its own, but particularly wrong since chives were featured so prominently on the loaded potato pictured on the bag).

This was far from the first attempt by Ruffles to do a loaded potato flavor, as we've previously tried their Cheddar Baked Potato, The Works and Loaded Chili & Cheese. The results of this attempt were mixed. The chips tasted a lot like cheddar and sour cream chips, except without any particular sharpness. There was definitely some flavoring, but it wasn't of the strong variety promised on the back of the bag, and I could hardly notice any bacon at all. Ruffles overpromised and underdelivered on this one.

From the package: “Load it up! Hey, you. Yes, you. Lover of anything piled high with bacon, melted cheese, and sour cream. Seeker of the most outrageous loaded potato skin, your dream of legendary flavor is now a reality. Mouth - meet Ruffles® Loaded Bacon & Cheddar Potato Skins flavored chips. Now that your mouth is full, it's time to find a way to hide these awesome chips from your freeloading roommate. Hide them under the bills – he'll never look there.”

This snack was discovered by Jeremy at Kangaroo Express, Naples, Florida. Review published .