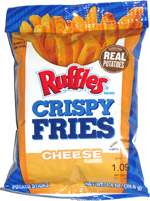 Taste test: There are lots of bagged fries on the market, but for years, Andy Capp's fries have remained the gold standard, one of the rare kinds to have a winning texture. Most fries (including Andy Capp's) and made from processed potato and/or corn, molded into the shape of fries, but this one promised to be different — made from sliced potato. I opened the bag to find that the fries had a golden yellow color, with areas of skin on some of the edges and ends, which seemed to confirm the promise of sliced potato. They were generally thicker than the regular Andy Capp's, more along the lines of the thickness of Andy Capp's Steak Fries, but with smoother edges and less of a light feel. I tried some, and they were quite nicely crunchy, crisp and loaded with flavor. It was a different crunch than other bagged fries — and also different than Andy Capp's — with a denser feel, and quite good. Instead of trying unsuccessfully to copy Andy Capp's like everyone else has, Ruffles did them one better on texture. The cheddar flavor (provided by a generous coating of powder) seemed like cheddar and sour cream, and it was strong and tasty, mixing well with the potato. Impressive. The only negative here was that the bag was filled less than halfway.

After eating half the contents, I decided to (somewhat) follow the optional instructions on the back, pouring the remaining fries onto a plate and microwaving it for 22 seconds. The results were excellent. The fries became like those extra-crunchy ones that usually are found at the bottom of a basket of freshly made fries: crunchy, fairly light and not bendable all, plus even warm. It's been many years since we've been this impressed by a bag of fries.

From the package: “Sliced from real potatoes” ... “Chips or fries? The timeless struggle, the eternal choice. Good news, champ, the correct answer is 'Both.' ” ... “Like your fries warm? Pour into a microwave safe container and heat on high for 30 seconds. Do not place this bag in microwave.”

This snack was discovered by Jeremy at Walgreens. Review published August 2013.