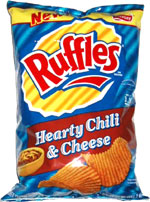 Taste test: You expect to get hit with a big whallop of chili flavoring — instead it's a mild chili taste.

The potato chip taste overpowers everything else. Still, this would be recommended for novice chili cheese tasters.

From the package: “Ruffles Hearty Chili & Cheese flavored potato chips give you the full, satisfying taste you've come to expect from Ruffles. But we've added extra excitement with a bold flavor that's unlike any other. Each bite brings you a rich, savory blend of chili and cheddar cheese flavor. If you like the taste of Ruffles, you'll love the taste of Ruffles Hearty Chili & Cheese flavored potato chips. So, the next time you have a craving for a bold, hearty snack, reach for a bag!”