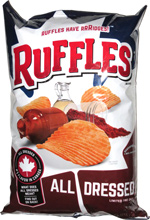 Taste test: All Dressed Chips have long been a favorite in Canada (we reviewed the Ruffles Canadian version way back in 2002) but in the USA, people generally don't even know what "All Dressed" means in the chips context. So it was nice that when Ruffles rolled out this limited-edition flavor for Americans, they went out of their way to explain on the bag just what it means (see "From the Package"). And they did a better job than I ever have explaining the flavor!

I opened the bag to find that the chips had medium-width ripples and colors ranging from light yellow to golden yellow, with some brighter orange accents. There were some areas of light skin on the edges. I crunched in to find a nice light crunch and a tasty but mild flavor, kind of like a mild barbecue sauce with vinegar and some other spices. It was much milder than the other All Dressed chips we've reviewed, including those Canadian Ruffles, but still tasty. It seemed like maybe they toned down this popular Canadian flavor a bit for introducing it to American snackers, but it was still very tasty.

From the package: “I bet you're wondering what 'All Dressed' means. After all, in America it just means you're wearing all your clothes. But, in Canada 'All Dressed' actually means delicious ridgy chips that somehow taste salty, savory and sweet all at the same time. Sounds good, eh?”