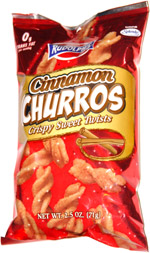 Taste test: I have eaten hot churros at several theme parks, as well as at the Cafe 150 at Costco, so I eagerly bought this bag, hoping that they had figured out how to duplicate the churro experience in a bagged snack.

These churros looked similar to pork rinds, except with a spiral shape, but they were actually made from wheat flour, not pork. Each piece was about an inch and a half long, far smaller than real churros, which can be a foot long or more, and the spiral shape was much more pronounced. My expectations were low when I bit in, but I was surprised to find that these tasted quite good and had a really nice light, crunchy texture. They didn't very closely match the texture of fresh churros, as those are denser and generally have some flex to them while being crunchy, but the taste really did remind me of churros. They also had an odd sweet aftertaste — not really bad, but they would have been better without it. I'm guessing that the aftertaste might have something to do with the Splenda (sucrolose) used to sweeten the churros.

From the package: “Crispy Sweet Twists” ... “Remember what it's like to cap off a day at the fair with a warm cinnamon churro? Or share one with a friend at a local sporting event? Cinnamon churros are a traditional Spanish dessert that's found its place in many cultures. Now yo can enjoy this treat anytime you want! And because they're fun to eat, kids will love them too.” ... “Sweetened with Splenda® Brand”