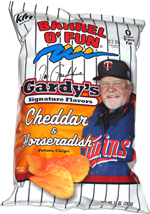 Taste test: These potato chips were somewhat wiggly and had a yellow/orange glow, with some scattered areas of dark skin on the edges of some chips, plus some bubbles embedded inside.

I crunched in to find a good crispness and a slightly stiff crunch, with a good kick of horseradish on pretty much every single bite. The horseradish burn wasn't super-strong, but it was fairly strong and quite consistent. Our snackers were big fans and offered many thumbs-ups as they returned to the bag for multiple handfuls.

Smell test: Smells like potato and sour cream. Wouldn't know there was any horseradish.

From the package: “Nothing says summer better than potato chips and baseball. We know you will love Gardy's favorite flavors in his signature series line.” .... “Available during the Minnesota Twins season only, grab some today!”

This snack was contributed to Taquitos.net by the manufacturer. Review published June 2013.