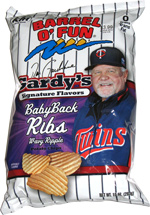 Taste test: These rippled potato chips were part of a new line of flavors inspired by Minnesota Twins manager Ron Gardenhire. The ripples were wide but not particularly high or sharp, and the chips were fairly thick and had a light yellow color with some orange seasoning plus some scattered bits of a darker orange. There were also some bits of skin on the edges. Chip sizes varied a lot, but there were some nice large pieces near the top of the bag.

We crunched in to find a sort of smoky barbecue seasoning of middling strength. It was tasty but far from overwhelming, so the flavor mixed nicely with the potato. Our snackers enjoyed the taste a lot, as many people crunched through multiple handfuls of chips.

From the package: “Nothing says summer better than potato chips and baseball. We know you will love Gardy's favorite flavors in his signature series line.” .... “Available during the Minnesota Twins season only, grab some today!”

This snack was contributed to Taquitos.net by the manufacturer. Review published June 2013.