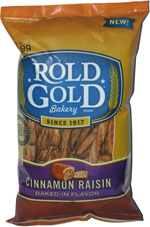 Taste test: These pretzels looked mostly the same as honey wheat pretzel twists, with a similar color and salt crystals on the outside, but upon close examination I noticed tiny spots in the dough that might have been cinnamon.

I crunched in to find that these tasted good but had far less cinnamon than I was expecting — and nothing resembling raisins. I'm a big fan of cinnamon raisin bagels, so I was expecting something like that. The bag had a picture of a loaf of cinnamon raisin bread. The taste was kind of like a raisin bread or a bagel, but the sweetness was way more subdued. The salt on the outside kind of pushed the taste in a different direction, so the raisin bread taste really came in the aftertaste once the salt had worn off. Our tasters liked these.

Smell test: Smells like a cinnamon roll. Very sweet, but not too sweet.

From the package: “We took the classic flavors of real, fresh bakery goods and brought them to a pretzel. Our Cinnamon Raisin Braided Pretzel Twists combine the crispy crunch Rold Gold® is famous for, with the subtly sweet taste of all natural raisins and cinnamon sugar baked into every bite.”

This snack was discovered by Jeremy at Market Basket. Review published June 2011.