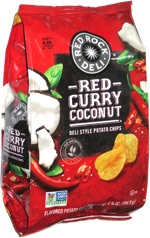 Taste test: When I spotted these potato chips in the supermarket, it brought to mind chips from Australia bearing the Red Rock Deli name with an identical logo, so I supposed that they were imported from Down Under. However, there was no reference to anything Australia on the bag, which seemed like something to emphasize if that were the case, or even if they weren't imported but were based on an Australian recipe.

It gets weirder. That Australian brand has long been owned by worldwide snack giant Frito-Lay/PepsiCo. But on the bag, there was no reference to Frito-Lay anywhere. The bag was found on a stand-up cardboard display bearing the Frito-Lay logo, but I've seen competing brands on the wrong display before, so that didn't seem definitive. On a whim, I Googled the street address shown for Red Rock Deli Company, and it came up as PepsiCo's corporate headquarters. And some more Googling revealed that the Red Rock Deli trademark is associated with Rare Fare Foods, another Frito-Lay company that they're using as cover for the Off the Eaten Path brand. So this is indeed a Frito-Lay snack — which they tried to obscure, with limited success — based on an Australian brand — which they chose not to emphasize, for unknown reasons.

As for the chips, they had wiggly shapes and a strong yellow color, plus a smattering of generally red seasoning on the surfaces. We crunched in to find that they were quite delicious, with a strong flavor that did indeed combine coconut and curry, to very positive effect. The combination of a tangy curry with a middling heat and cool coconut really worked well, and the crunchy potato chips served as a great platform for that flavor. Very tasty!

Smell test: Intense smell, different from any other chips we've tried, but not particularly like coconut or curry.

From the package: “Red curry love is ... hot tempered cayenne pepper with laidback coconut flavor. It's a complex relationship but that's how to keep it spicy.”