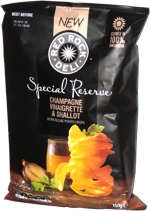 Taste test: The designers of this bag of potato chips didn't hold back on setting high expectations, loading up the name with fancy words including "Ultra Deluxe" and "Special Reserve." We opened the bag to find that chips had a strong yellow color, with wiggly shapes and many folded-over pieces, plus a smattering of fairly large green bits on the surfaces.

We crunched in to find a strong, crisp crunch and a very nice taste, with a mild seasoning that had just a slight vinegar zing to go along with an onion-lke flavor from the shallots. We won't say that they were the very best chips ever, but they were quite good, so we can't fault Red Rock Deli for their choice of words.

From the package: “The finest Australian potatoes are roughly cut and slow-cooked in 100% sunflower oil. They're then seasoned with the elegant and zingy taste of French Champagne Vinaigrette and fresh Shallot.”

This snack was discovered by David Heiniluoma in Sydney, Australia. Review published January 2018.