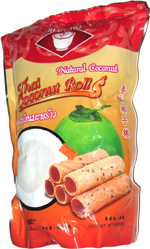 Taste test: These hollow tubes had a light brown/dark beige color and were about three-quarters of an inch in diameter, so they were a bit thicker than your typical chocolate cookie wafers. They also had some dark sesame seeds embedded inside (mostly at one end of the tube, not evenly spaced as in the picture on the bag).

We crunched in to find a light, crunchy, brittle texture that was very similar to those chocolate wafers, and even a similar taste, with the exception being the chocolate. The taste was sweet, but it didn't initially seem much like coconut. The coconut flavor arrived in earnest in the aftertaste, nice and sweet. This was a tough one to convince some tasters to try, but everyone who did try these liked them.

From the package: “product of thailand”